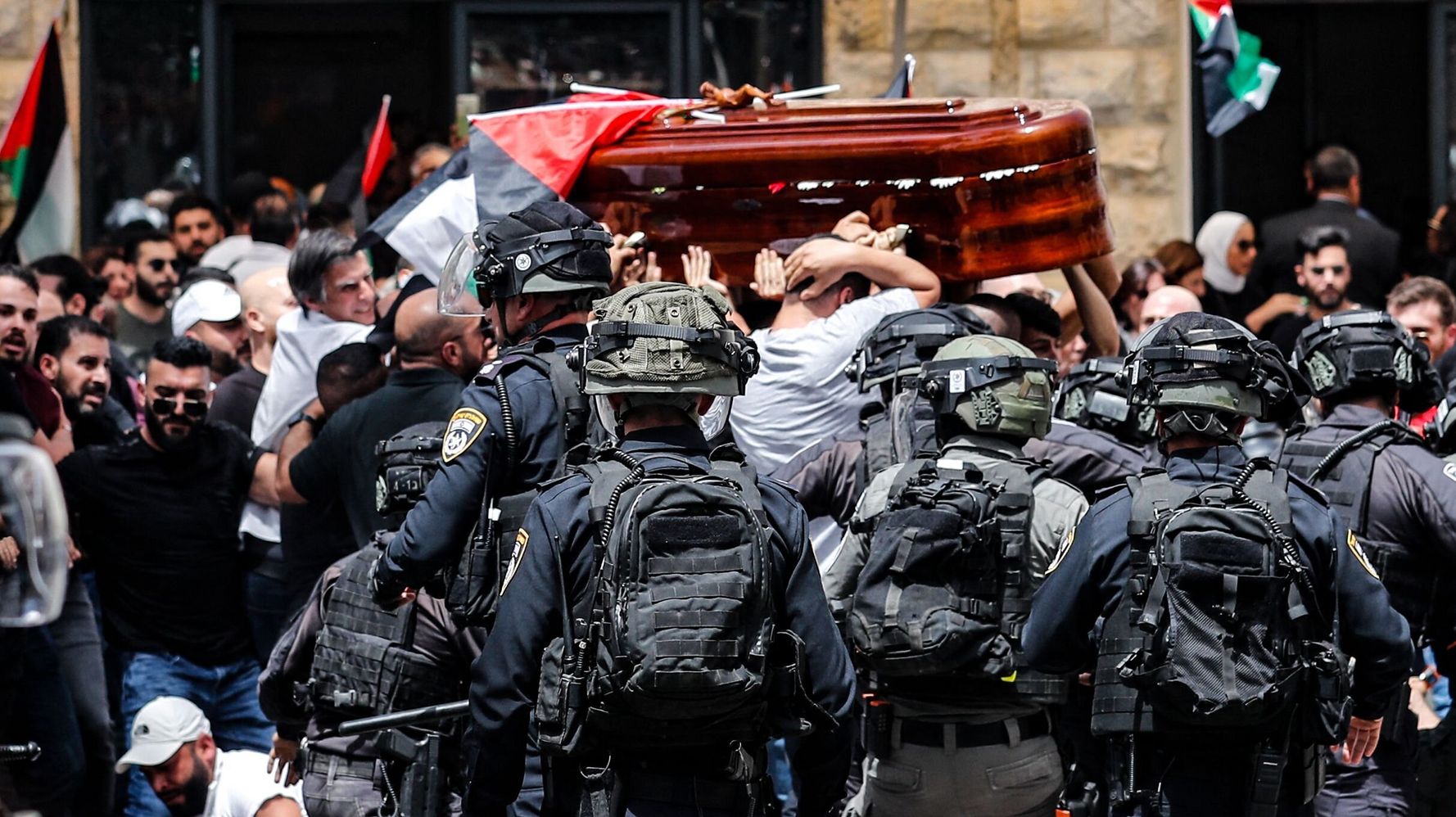 Veteran Al Jazeera journalist Shireen Abu Akleh was laid to rest in Jerusalem on Friday, but not before her funeral procession was interrupted by Israeli police who beat onlookers and pallbearers, forcing them to drop one end of the coffin.

The confrontation took place outside the hospital where mourners, many waving Palestinian flags, picked up Abu Akleh’s casket. They intended to march on foot to a church in nearby Old City, as Abu Akleh was a Christian, but were assaulted by Israeli forces.

Video shows the pallbearers being violently shoved to one side of the street, struggling to maintain control of the casket as officers beat and kicked those in the crowd.

Abu Akleh, 51, was shot in the head on Wednesday while covering an Israeli military raid in the occupied West Bank. A colleague who was injured and the Al Jazeera network identified Israeli forces as firing the fatal shot.

After the clash outside the hospital, Abu Akleh’s family was permitted to transfer the casket to a vehicle and drive it to a Catholic church in the Old City, The Associated Press reported. Police fired tear gas at those who remained.

Even the hearse was not unscathed. Video showed Israeli officers snatching Palestinian flags from the vehicle carrying Abu Akleh’s body.

Israeli police said in a statement to The New York Times that they took “enforcement action” after witnessing “nationalist incitement” during the procession.

The violence appalled some in the international community. The Netherlands’ ambassador to Israel said he was “shocked by the disproportionate and disrespectful behavior of the Israeli police”.

At various points in the procession, mourners sang the Palestinian national anthem and chanted things such as “Palestine, Palestine”, “we die for Palestine to live” and “our beloved home”, according to the AP.

Shocked by the disproportionate and disrespectful behaviour of the Israeli police in Jerusalem today during the funeral procession of Palestinian journalist @ShireenNasri @AlJazeera. This is not the way to maintain order and deescalate tensions.

Abu Akleh was a Palestinian and US citizen who had covered life in the disputed lands for decades, becoming a well-known Palestinian journalist. Thousands of people turned up for her funeral in Jerusalem’s Old City.

Israel claims the whole city as its capital, although much of the world does not recognize it as such due to the ongoing conflict with Palestinians, who hold claim to the eastern part of the city. Earlier this year, Amnesty International joined the human rights groups accusing Israel of perpetuating an apartheid system against Palestinians both within Israel’s borders and in disputed territories, including the West Bank.

The day of Abu Akleh’s death, she was wearing protective gear identifying her as a member of the press. Other reporters at the scene told AP the journalists had made their presence known to Israeli soldiers. They said they did not see any Palestinian militants, and there were no clashes in the immediate area where Abu Akleh was hit, contradicting claims from the Israeli military that Palestinian fighters had fired hundreds of rounds, some in her direction.

The reaction contrasted with the furious US denunciation of Russia in response to journalists killed in the Ukraine war; unlike Russia, Israel is considered an American ally.