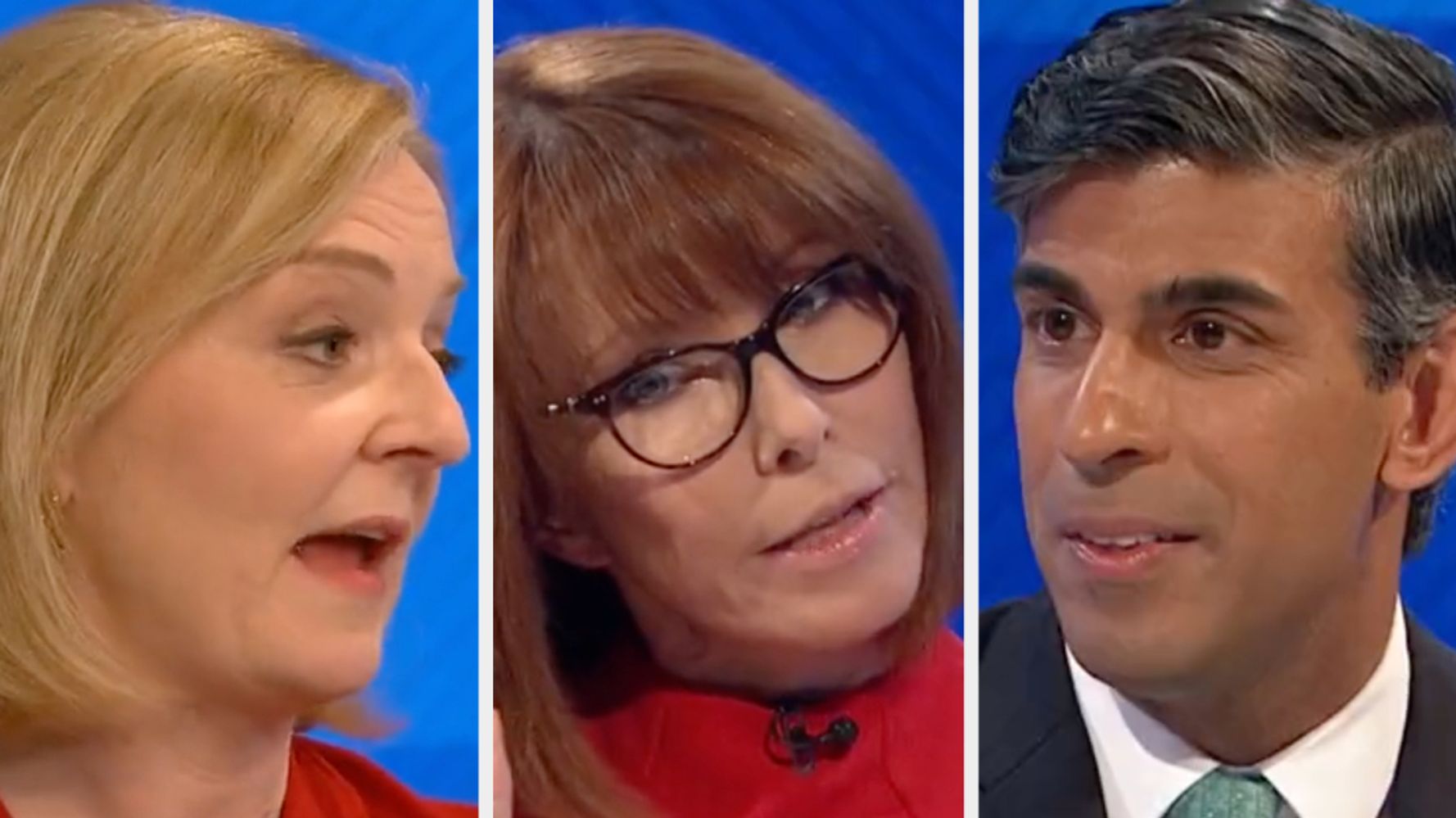 Liz Truss and Rishi Sunak were put under the spotlight by Sky News’ Kay Burley last night, and both of them made a handful of slip-ups.

There’s still a month to go before the 160,000 Conservative Party members vote for one of Boris Johnson’s old cabinet to replace him.

Frontrunner Truss, who is still foreign secretary, and Sunak, who resigned as chancellor last month, steered clear of the blue-on-blue attacks for The Battle for Number 10 and instead provided the clearest idea so far of what their respective premierships might look like.

As Sky News’ Sam Coates summarised, it showed that Truss would be a “disruptor” and unpredictable, while Sunak would be the opposite.

From Burley’s brutal takedowns to questions on Johnson, here are the top moments from last night.

The Sky News presenter went viral after she put all of Truss’ U-turns to her in a scathing list last night.

She pointed out that Truss once supported Remain, but was now a keen Brexiteer; supported sending Brits to fight in Ukraine, but doesn’t anymore; wanted to build on the green belt, but changed her mind; wanted to abolish the monarchy, now doesn’t; wanted to arm Taiwan before U-turning; and only this week, wanted to cut civil servants pay out of London before claiming she’d been “misrepresented”.

Burley finished: “Will the real Liz Truss please stand up?”

Truss has maintained throughout her campaign that she has nothing to hide – a claim she repeated last night.

The foreign secretary said: “There are no skeletons in my closet.

“I think everything I’ve ever said and done is known about very publicly.”

Hours after the Bank of England predicted that a recession of five quarters and inflation of 13.3% was on its way, Truss claimed that economic decline was “not inevitable” as long as “bold” action was taken.

Seemingly blaming the high taxes on the looming recession, she also claimed: “We can change the outcome and we can make it more likely that the economy grows.”

Sunak, on the other hand, called for the Conservative Party to “get real and fast” because the “lights on the economy are flashing red and the root cause is inflation”.

Pressed on how the UK would cope with debt under Truss’ tax plans, the foreign secretary said: “Trying to balance the books prematurely is actually counterproductive.”

She claimed that growing the economy was more important – but the audience member alleged she was not happy with that response.

The Tory member said that what former Conservative prime minister Margaret Thatcher “believed in was sound money”, but Truss’ ideas were “not sound economics”.

Truss has faced Thatcher comparisons throughout her leadership campaign, but has rejected claims she is deliberately trying to emulate the Iron Lady.

The foreign secretary lived up to her nickname as the Johnson continuity candidate by once again defending the outgoing prime minister.

She refused to be drawn on how she would act if Johnson were found to have deliberately misled parliament over partygate, even when Burley asked if she would withdraw the party whip.

“I’m not making prejudgements, I’ll see what the [parliamentary privileges] committee says. By the way, I’m very clear that he did not mislead parliament.”

#KayBurley – would you remove the whip from Boris Johnson if he’s found to have deliberately misled Parliament over party gate?

Burley put it to the former chancellor, who served in the cabinet for more than two years, why he had such little backing from his once-close colleagues.

Her question came shortly after Sajid Javid, the former health secretary who used to work in the Treasury with Sunak, confirmed he was actually backing Truss in the race – even though she had been criticising his legacy with the NHS.

Sunak and Javid also resigned within minutes of each other at the start of July, prompting the mass Tory exodus from Johnson’s government.

Responding to Burley, Sunak said: “Plenty of people who have sat around the cabinet table also support me.”

6. “We all say silly things when we are younger”

Sunak was also quizzed over the viral video where he suggests he is friends with people from across the social classes – aside from anyone who is working class.

It showed Sunak, who would have been 21 at the time, on a BBC show called Middle Classes: Their Rise & Sprawl.

Pressed over the unflattering clip by Burley, and asked if he has any working-class friends now, Sunak said: “I don’t go round asking them… I’d rather think we’ve moved beyond that as a country. I think people are less interested in where you’ve come from and more about where you’re going.”

He also dismissed claims that people found him hard to relate to due to his multi-millionaire status.

7. Sunak denied stabbing Johnson in the back

When a member of audience suggested Sunak had been plotting against Johnson for months, he replied: “That is simply not true.

“I was due to give a speech with the prime minister the next week (after the resignation) and in the conversations about putting that speech together on the economy it was clear our differences were too big to reconcile. So that was the reason.

“Plus, let’s not look at the past with rose-tinted spectacles here. Everyone remembers what was going on with Chris Pincher.”

8. Sunak seemed to win the most support from the audience

The Sky News audience backed the former chancellor in a show of hands over Truss, even though she is currently leading in the polls by some margin.

The audience was made up of Conservative Party members (there are 160,000 in total) who get to vote on who will be the next party leader, and therefore the next prime minister.

However, despite all of the polls giving Truss more than a 30-point lead of her opponent, Sunak seemed to be the winner last night, suggesting it might not be as clear as cut as pollsters had been predicting.

Rishi Sunak speaking at an event in Tunbridge Wells as part of his campaign to be leader of the Conservative Party and the next prime minister. Picture date: Friday July 29, 2022.Rishi Sunak has boasted of having taken money from “deprived urban areas” in order to give it to other parts of the country.He made the admission while speaking to Tory members in Tunbridge Wells while on the leadership campaign […]